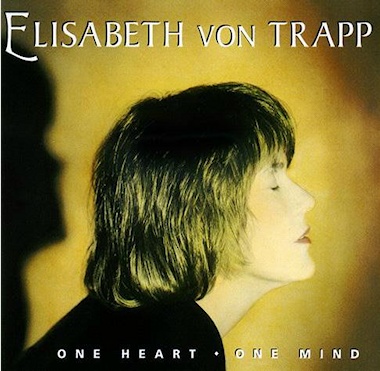 For Elisabeth von Trapp, “ the sounds of music “ are part of her earliest memories. Born and raised in Vermont, Elisabeth is the granddaughter of the legendary Maria and Baron von Trapp, whose story inspired The Sound of Music. Singing professionally since childhood, Elisabeth has enthralled audiences from European cathedrals to Washington D.C.’s Kennedy Center.

Inspired by her father Werner von Trapp’s guitar playing and singing, Elisabeth has carried on the legacy of the internationally renowned Trapp Family Singers. She began taking piano lessons when she was eight and by the age of sixteen she was playing guitar and traveling the back roads of New England performing with her siblings at weddings, gospel meetings and town halls

Building on her famed family’s passion for music, Elisabeth has created her own artistic style, at once ethereal and earthy, delicate and powerful. Listeners have likened her to Judy Collins and Loreena McKennitt. Critics have called her voice …“ hauntingly clear “ “ joyfully expressive “ and “ simply beautiful.”

Elisabeth’s concert repertoire ranges from Bach to Broadway … Schubert to Sting. With equal ease and eloquence she sings timeless wonders like Rodgers and Hammerstein’s Favorite Things and Edelweiss, Lieder by Mozart, Puccini’s O Mio Babbino Caro, soaring gospel tunes, pop classics like A Whiter Shade of Pale and her own stunning compositions.

In the spring of 2001 Elisabeth was granted permission from Robert Frost’s publisher, Henry Holt & Co., to sing parts of the poet’s oeuvre. Poetic License, released in June 2004, features the musical settings of poems by Frost and Shakespeare, a Japanese haiku and interpretations of Over The Rainbow / What A Wonderful World, Sting’s Fragile and Schubert’s An Die Musik.