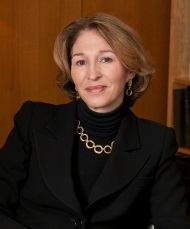 Dr. Anne-Marie Slaughter, described as “an innovative and prolific scholar” by Foreign Policy, turns big ideas and deep analysis into realistic strategies for a networked world. As President and CEO of the New America Foundation, she leads a team of scientists, technologists, and political and economic thinkers.

A contributing editor for The Atlantic, Slaughter became one of the country’s most talked about writers with Why Women Still Can’t Have It All, an in-depth and controversial look into the extreme work-life balance of today’s professional women. The author and editor of six books, including A New World Order and The Idea that Is America, she has published over 100 scholarly articles in international law and relations.